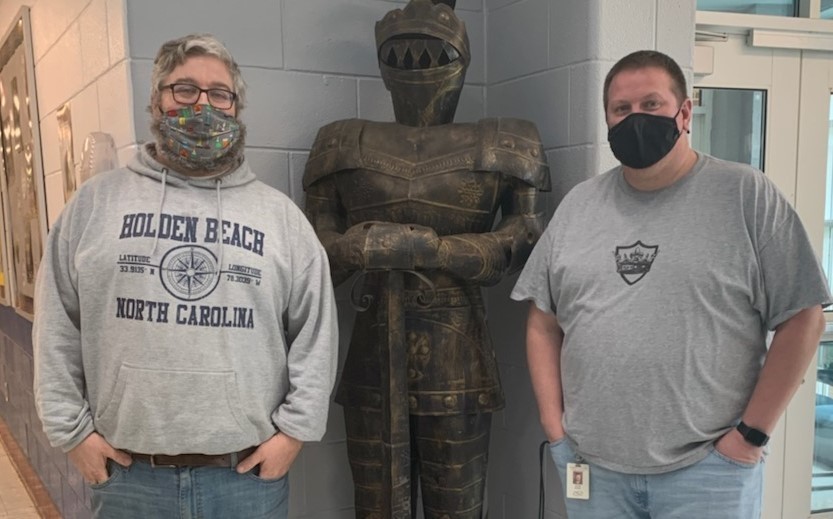 Ninth-grade science teachers Keith Hamm and Mike Carey are in the process of organizing the contest that -- for this year at least -- will be primarily online. Currently, the two are asking students to register and view all contest details by visiting their Virtual Science Fair site. Registration closes April 1.

For the project, students will work independently on research-based science projects and present their findings on a virtual display board. They’ll also complete a research plan and keep a log book showing their daily activities.

And while the competitive nature of the science fair might inspire some students, Hamm and Carey are hoping that it will also allow students to explore their scientific interests.

“I thought that by getting more students involved, we might get more of them interested in science,” Hamm said, adding that there’s a trend of young people exploring science-related career fields. “Nationally, the swing is toward going to more scientific careers because of the pandemic -- there’s just more interest in science.”

Carey said he hopes that this is the start of an annual event that can showcase students’ scientific talent.

“I really hope this is the foundation of a district-wide science fair that happens every year,” Carey said. “We’ve got some amazing science talent in the district and it’s time that we showcase it, and I want [the students] to do it on more than just a school-level.”

As for topics for the entries, Hamm and Carey said the options are wide open, but warned they are hoping to see research-based science projects as opposed to merely demonstrations.

“We really want to see things that would be beneficial and someone could implement,” Hamm said. For example, he suggested projects might focus on agriculture and testing ways to farm more efficiently. “I know when you think science fair, you immediately think ‘volcano.’ That’s more of a demonstration than a research project.”

Carey emphasized the research required of the projects along with what he called the “Wonder” component.

“Something we both want in our class is a ‘wonder’ about the world around us, which you can spark with demonstrations, but learning happens when you research and dig deeper into it,” Carey said. “We’re wanting to push our students to do projects that challenge themselves and make them think about what they’re showing us, and explain what they’re showing us. You can absolutely demonstrate something, but what’re the nuts and bolts behind it?”

For students that perhaps don’t have a topic idea already in mind, both suggested they start with a basic internet search to glean ideas, or simply start by asking a teacher.

“If you asked me what science project I want to do right now, my brain goes in 50 different directions at first,” Carey said. “So maybe looking stuff up online can help you narrow your focus down to one project or to something that inspires you.”

Both also said they wouldn’t be surprised to see pandemic-related projects.

With the younger grades, some help from parents is expected, but Carey doesn’t want parents to be overwhelmed with their involvement.

“This is really set up where the students have access to all the stuff online,” Carey said. “So hopefully it’s going to require a lot of the student, and just a little bit in those younger grades of parent supervision.”

Added Hamm: “I think this is a great way for parents to see what their kids are doing in school and what they can do in school.”

So far, students have already begun registering and Hamm said he’s also been contacted by parents for more information.

The two are still finalizing details regarding prizes for winners and the judging of projects, but Hamm said he’s hoping to involve Marion County High School students as judges to make the entire science fair even more “student-led.” The contest is also open to students attending St. Augustine.

While the idea is still in its early stages, the hope is that this is the beginning of a yearly event.

“Hopefully in the future this is an in-person, live science fair where community members can come in and see the projects,” Carey said.