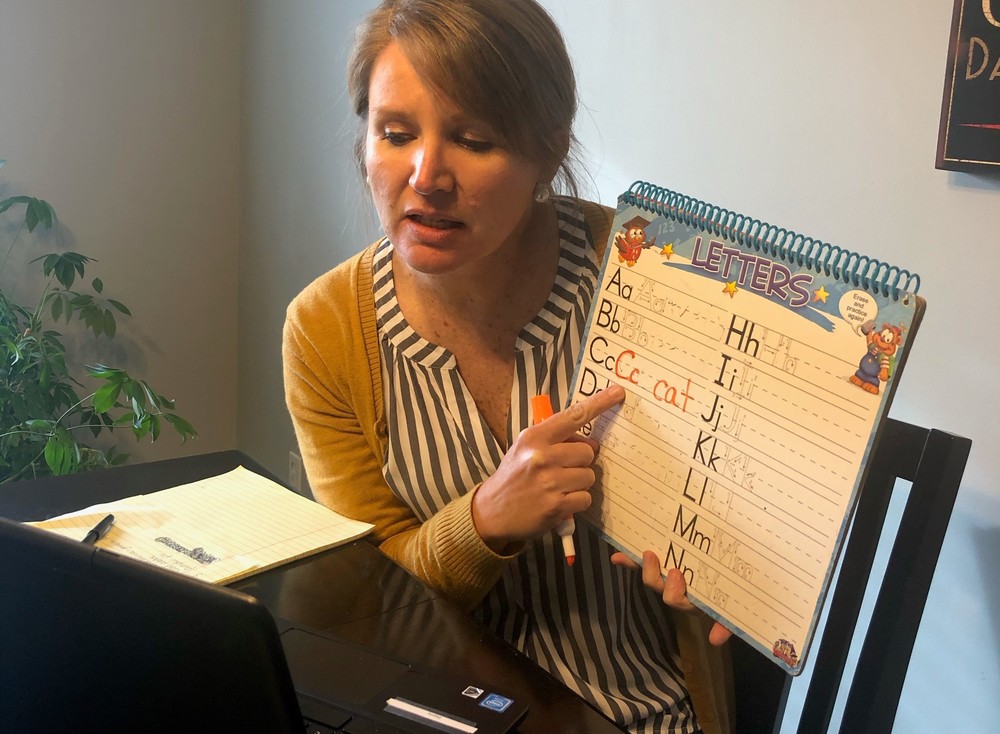 Teacher Spotlight: For Tracy Cochran, Distance-Learning has broadened her horizons as an educator

This article is one in a series of feature stories about how MCPS teachers have adapted to Distance-Learning.

Calvary Elementary Exceptional Child Educator Tracy Cochran admits that before the pandemic, she wasn’t the most tech-savvy teacher. And when school abruptly moved to Distance-Learning at the end of last school year, it wasn’t necessarily easy to adapt to a new way of teaching.

“It was challenging, especially for me,” Cochran said. “I wouldn’t say technology was one of my guaranteed strengths. For me the overwhelming part was learning the technology as I went -- especially last spring. I’m such a hands-on teacher.

“I’ve always focused so much on reading and math and being hands-on, technology wasn’t always as important.”

However, since the spring, Cochran had immersed herself in the world of educational technology.

“I think I’ve broadened my horizons to more resources and a lot more knowledge,” she said. “Last spring, I spent so many days and nights doing webinars.”

That time learning how to implement new resources was well spent, for both Cochran and her students.

“In a sense, I have increased my knowledge because we are in such a world of technology,” she said. “Even when the kids came back in-person, they were there, but it was still an Internet world.”

“For me there was an overwhelming feeling of learning all the technology -- things like using Google classroom,” Cochran said. “This school year has been somewhat easier because I took where we started last spring and built on it. The students are now used to it.”

Cochran now uses two Chromebooks simultaneously -- one to communicate with students and the other to work off of.

And while she doesn’t want her students to spend all of their time in front of a computer screen, she has noticed “that some of these kids seem to learn better” in an online format.

Despite the drastic change in the way teachers and students interact, for Cochran, maintaining positive relationships with her students is still at the forefront of her teaching.

“We’re still trying so hard to keep that personal connection,” she said. “As soon as the kids get on that computer screen, we take those first couple of minutes to just talk to them. I’ll say something like, ‘Tell me something awesome you did today.’ I try so hard to keep it personal.”

In fact, Cochran says her favorite part about Distance-Learning has been the connections she has made with her students in large part because they are at home during class.

“I feel like we’re on a more personal level because I see more about them -- they’ll be at the kitchen table or in their bedroom,” she said. “Or they’ll be excited to show me their dog or introduce me to a brother or sister. There’s so much more access for true personalization.”

Perhaps as important, Distance-Learning has also led Cochran to get to know her students’ parents better as well.

“When I do resource instruction, which is a really small group, a lot of times the parents are right there beside them, so I use that time to talk to the parents. I’m just constantly making that bond and that connection even though we are distanced [...] There is so much more parent involvement. Even on my part -- I’m reaching out more to check on my kiddos.”

And as a collaborating teacher in six classrooms, Cochran says she and her colleagues have been able to maintain the same small-group philosophy they use when teaching in-person.

“There have been days where I think we all wanted to cry, but truly we are all in this together,” she said. “Even as a collaborative team at Calvary I think we’ve all gotten closer.”