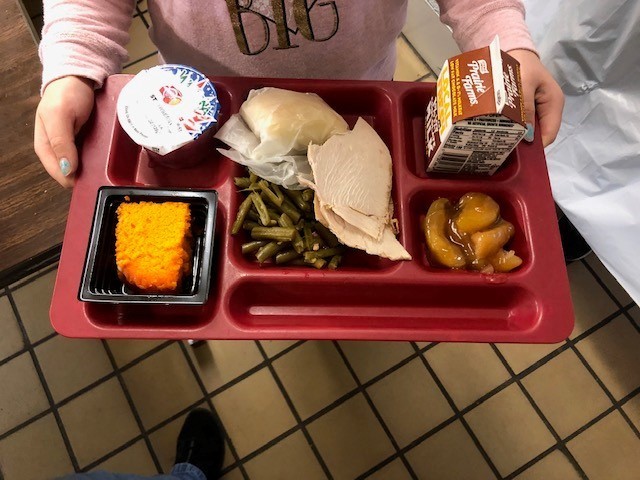 Throughout a typical school year, perhaps no MCPS school lunch is more highly anticipated than the traditional Thanksgiving meal Marion County Public Schools provides on the Thursday prior to the holiday. Complete with all trimmings, the MCPS Thanksgiving meal is consistently one of the most popular among both students and staff.

This year, students and staff can be especially thankful for that meal because of the difficulties school districts across the state and nation have had receiving food items due to supply chain problems.

However, for this meal, preparations were made well in advance.

“We ordered our turkeys for this meal in September to make sure we got them in,” MCPS School Nutrition Director Jennifer Wheeler said, adding that much of the Thanksgiving meal is made from scratch.

The meal was especially popular among the MCPS staff. Some schools saw four times as many adult meals sold compared to an average day. That difference was even greater prior to the pandemic.

“More staff members eat this meal, and before COVID, lots of community members would come pick up a Thanksgiving meal,” Wheeler said.

Last year, the district was operating on Distance-Learning during the week leading up to Thanksgiving. But because the meal is so popular, cafeterias served it in the spring when students had returned to In-Person learning.

This school year has presented a different set of challenges for the district’s School Nutrition department -- receiving the items they ordered.

On a recent day as she tried to order food items for the upcoming week, Wheeler said her provider’s website showed close to 800 items as out-of-stock.

Many times, menus that had been planned well in advance have had to be modified based on what was available to order. There are certain items schools can typically get (green beans for example), but have had difficulty with other items such as pre-made biscuits, rolls or most cereal breakfast items.

Wheeler said she wants parents to understand that ordering menu items for the district isn’t always as simple as it may seem. She estimated that she and her cafeteria managers spend hours searching for replacement items to order based on what is available.

And while some have wondered why the school system can’t just purchase items locally, that too is problematic.

As Wheeler explained, to purchase the volume of items the school district would need local shelves would be emptied, assuming there were enough items even available.

“For example, to do hamburger day in this district, it takes 3,200 hamburger buns,” Wheeler said.

As a result of supply chain issues, Wheeler said she’s had to rework school menus to include more scratch cooking. However, even that has its issues, as ordering flour has sometimes proven difficult.

And while Wheeler noted that some of the cafeteria staff members seem to enjoy a more traditional style of cooking, “The problem with scratch cooking is that it then becomes a labor concern. You need more hands available to scratch cook.”

Nevertheless, since she began her role as School Nutrition Director, Wheeler said she has made it a goal to move to meals that felt more homemade instead of relying heavily on the typical breaded chicken.

The problem with meals this year has been knowing what is available to include on a weekly basis. But despite those setbacks, the traditional MCPS Thanksgiving meal remained a huge success.