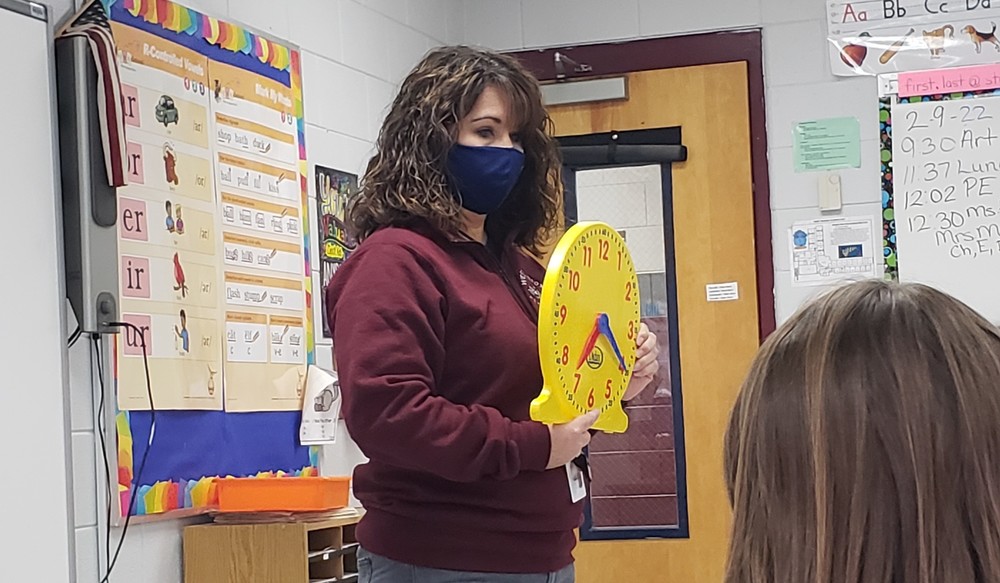 “The first time we used glue out of a glue bottle, the students didn’t know how to open up the orange glue top,” Keene said. Instead of loosening the orange cap, students removed the entire top off the bottle.

“In 21 years, I’ve never had to teach students how to use a glue bottle,” Keene added with a laugh. “It was funny, but I was waiting for everyone’s glue to go all over their paper.”

It’s a common skill that students typically have already mastered from time spent at school working on hands-on crafts in preceding years. But when so much of the past two years have been limited to learning from home, it’s not surprising students are less familiar with those types of skills.

For Keene, that has meant spending more time going over the fundamentals of school, whether it’s opening a bottle of glue, washing hands in the restroom, or just being familiar with rules and expectations.

“Even opening a book and finding the correct page was a challenge at the beginning of the year,” she said.

Keene said she and other WMES teachers also noticed early in the year that students struggled to have enough stamina to complete a full school day.

“After lunch they were exhausted,” she said. “We had to adapt our teaching. We did the core instruction in the morning then learning activities after lunch when students were tired. We had to build their stamina for the first few weeks.”

However, despite those obstacles, Keene calls this her “most rewarding year” as an educator in large part because of the tremendous amount of academic growth she’s witnessed in her students.

“I’ve seen more growth out of this group than any group I’ve taught in twenty years,” Keene said. “They came in with some deficits, but now they’re excited about reading and they want to show me. They want to show [WMES Principal] Mr. Mattingly how much they’ve grown with their reading.

“I’ve talked to other teachers and we are all seeing more growth this year with the in-person instruction [...] Just being back in the classroom and in the school atmosphere has helped tremendously.”

She’s also noticed a sense of enthusiasm among students to be back in school.

“They’re excited to be back, and they’re enthusiastic about learning. For them, second grade this is their first full year,  so they’re excited about things like class parties and the 100th day of school.”

Although the “kids adapted quickly,” Keene said she knew this year would be different early on, which is why she zeroed in on literacy skills as her biggest focus this year.

“I’ve focused mainly on reading this year,” Keene said. “We’re doing lots with Fundations [a language program] and phonics. We do decodable readers, and guided reading, and reading in the textbook. So, we read all day long.”

This year has also involved finding new approaches to teaching while also leaning on her colleagues for support.

“I spend a lot of my free time researching new strategies and reviewing things that I have learned in my twenty years from veteran teachers,” Keene said. “There are academic gaps, but I’ve worked with the K-1 teachers to find resources to fill those holes.”

In fact, Keene said she’s seen a huge level of teacher commitment from the entire school

“West Marion has done an awesome job in getting these kids where they need to be,” she said, noting that teachers have bus duty in the classroom before school. “You can walk up and down the halls [before school begins] and see teachers doing remediation with students.”

Keene also had high praise for her students’ parents, who she acknowledged had a heavy task last year helping their children learn from home.

“I know many of them had full-time jobs and then had to come home to help with virtual learning with their child,” she said. “Now, we’re sending home homework and they are continuing to support the school system and support us.”

Perhaps most importantly, Keene said she’s hoping that her students recognize their growth since the beginning of the school year. She’s kept weekly records on their reading progress, which she plans to share with them at the end of the school year.

“I’m excited to show them how much they’ve grown,” she said.

Keene said that in August, she noticed that some of her students came in not knowing the sounds of letters, which she had to review.

“Now they can sound out short words and read stories. The growth of being back in the classroom is amazing.”