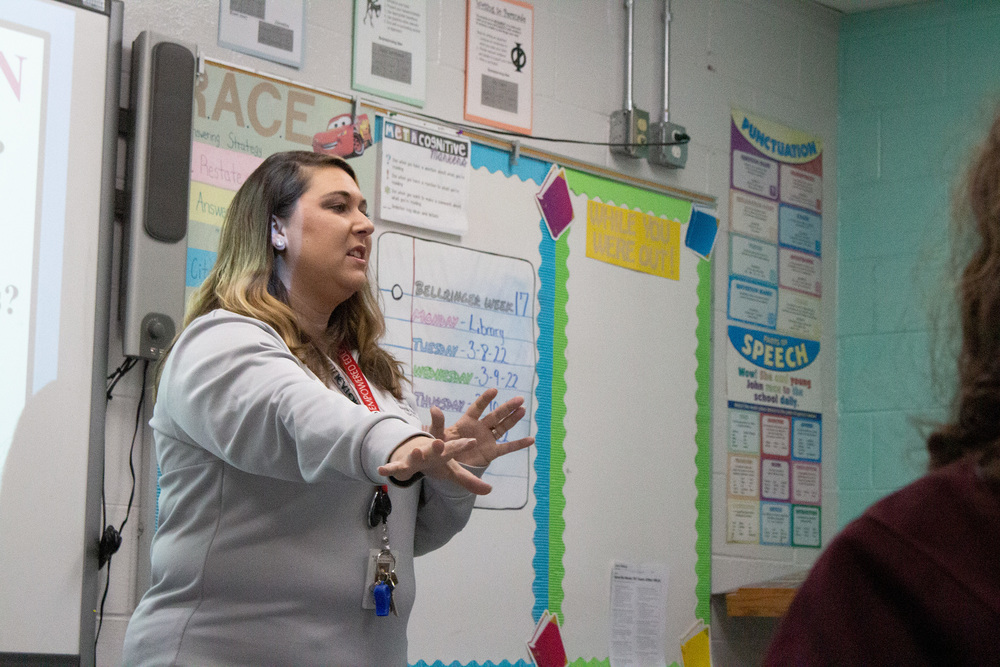 As Marion County Middle School English /Language Arts teacher Carrie Thompson explains it, having missed so much in-person instruction over the past two school years left many of her students without some of the skills she’d come to expect.

As a result, she’s had to learn to pace her instruction appropriately for her seventh graders whose last true school year was in the fourth grade.

Chief among those issues: organization.

Last year, with so much of the school year happening online, students could depend on their Chromebook without having to organize documents themselves.

But that’s not to say her students prefer a digital-only form of organizing.

“The kids beg for paper copies this year,” Thompson said with a laugh. It’s one of the seemingly mundane aspects of in-person learning that students lost out on during much of the past two years, but an important part of the school experience, as Thompson explained.

“They like the interaction of having something on paper,” she said. But it’s not just about hard copies instead of computer files. “They like going to a group and doing something in-person.”

Since the school year began in August, Thompson says she’s seen a tremendous amount of improvement among her students’ ability to stay organized and work collaboratively, as well as academic growth. She credits that improvement to in-person learning.

Thompson said she recognized that during Distance Learning, students couldn’t always get everything they needed at home to be successful.

“Being at school and being around other kids and having motivation coming from teachers, and students and then learning how to be internally motivated is important,” she said.

That time away from school also meant students have had to develop skills and habits they would normally already have mastered, and, as the teacher, Thompson says she had to focus on modifying her approach to the classroom.

“Again, it goes back to where I have to slow myself down to teach. I was ready to hop into the content when I needed to prepare them. I needed to use the first two months of school to get them prepared for coming to school.”

Now, though, she says her students are at a point where they can handle typical academic expectations.

That means Thompson has been able to focus more on teaching content and strategies to help students learn. For her, one of the most important ways to engage students is through small group activities.

Although her approach to group work varies, sometimes it’s as simple as reviewing students’ performance on a quick five-question quiz. As other students complete assignments individually, she’ll meet with a small group of students grouped together based on their quiz results.

“I try to identify areas where students struggled, whether it’s the main idea or the author’s perspective,” Thompson said. “And then I work with them on that particular concept [...] That’s why I think the kids like it. We get more individualized conversations in that small group. I think they like the attention.”

Thompson estimates she incorporates small group work about once per week, based on when she’s able to review assessment data.

Last year, she says she attempted similar activities using breakout rooms online, but found it difficult for her students to interact with each other via Chromebooks.

There were still some hurdles this year as students were out of practice collaborating in person. To help with that, Thompson gave students conversation starters such as “I know you said this, but …” or “I agree with you, but …” to help jumpstart peer-to-peer discussion. Now she’s seeing self-sufficient group work from her students.

“I feel like they are very comfortable in my classroom -- they’re comfortable asking questions,” she said. “That’s something they’ve learned this year.”

Recently, Thompson began a unit using S.E. Hinton’s The Outsiders, which she didn’t get a chance to teach during Distance Learning the past two years.

“I feel like this is our home stretch,” she said. “I’m excited.”

She said parents should feel optimistic too about where students are headed now that school has regained a sense of normalcy.